Offline climbing the easiest of the Seven Summits 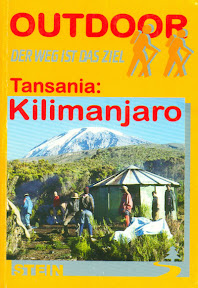 If you send me an email during the rest of February, you are highly unlikely to get an answer. However, I promise not to spam you with an "Out of office" auto reply. I dislike receiving those messages, as they seemingly have little correlation with when the person actually will reply to the email.

My excuse for not responding is that I won't be around my laptop and that connectivity is bad in rural TanzaniaÃ‚Â anyway. I will make an attempt at conquering Kilimanjaro, one of the Seven Summits, and to twitterÃ‚Â while doing it -- to the extent there is sufficient SMS coverage, blood sugar and my fingers aren't numb.

I also hope to take some pics, which will illustrate a blog hopefully titled "Over 14% of the Seven Summits conquered", rather than "Taking the Milk Train from Africa".

Huh, Milk Train? Explanation: If you're dishonourably released from the Reserve Officer School in Finland, you're said to take the "dairy train" home (I took course 174 in 1984 and luckily returned with a non-dairy train). And while I'm not too worried about whether I've trained sufficiently, I am worried about how I'll take the height (5895 m!), and how my knees take the long hikes.

BTW, there are MySQLers who have made the Kilimanjaro. Olivier Beutels (in Mktg in Finland) and Duleepa "Dups" Wijayawardhana (in, drumrolls, the Community Team in Canada) are the ones I know of. Quoting selected passages from Dups's Kili blog from Summit Day:

And then off we went into the moonlit night. It is cold, brutally cold. Colder even than Edmonton in the dead of winter.Ã‚Â

After passing 5000m I start having breathing problems. I am not getting enough oxygen into my system. It is now painfully slow for all of us, three steps, three breaths.Ã‚Â

The horizon is getting lighter and the glacier wall is to our left. I have never seen the horizon that wide, that immense. It is a scene I will never forget.

Slowly I make it to the summit with the others. This is the moment I had waited for.

If Uhuru Peak was the summit of my emotion, the path down was the deepest well of despair. My blood sugar is extremely low, my water is frozen and I am feeling the effects of AMS more severely. At one point Victor is holding me and I black out and come back. Even more disturbing I've developed a fever. My temper is short and I immediately pass out on my return to Barafu Huts.

If you're interested in the schedule, take a look at my blog entry "Attempting the Kilimanjaro".
Posted by Kaj Arnö at 08:51