Kilimanjaro: The Promise of the Summit 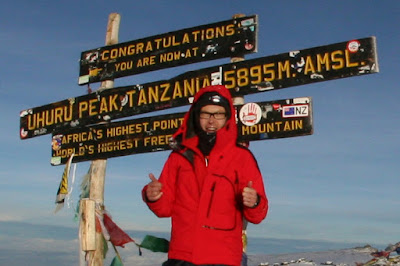 So, there it was: The mandatory picture that every successful Kilimanjaro climber wants to brag with. And I am no better (or worse) than any of my predecessors. Of course, I want to show that I've conquered well over 13 % of the world's Seven Summits.

What did I see from the summit? A new release of MySQL? To be honest, my mind was completely off business. I was contemplating the most basic human needs. I wasn't feeling explicitly tired nor cold (except for my hands! I had taken off the gloves to take pictures). But I was completely out of breath, as the air is very thin at 5895 m above sea level.Ã‚Â

Now, I'm back home, tending to an inbox of over 400 emails personally addressed to me (and an unknown amount received through mailing lists).Ã‚Â

Luckily, I couldn't access those emails from the hotel in Tanzania where we stayed after the climb, so instead, I have been able to write plenty of Kilimanjaro related blogs. Each blog exists in one language only. First, the English blogs:

In German, I have so far only one blog


I may or may not decide to translate (or rewrite) one or more of the non-English blog entries. Feel free to suggest which one would interest you!
Posted by Kaj Arnö at 19:02