Yesterday, I started my sporadic series of blog posts where I share my experiences improving my online manners through social networking websites, many of which are powered by MySQL. My first target was the traveller site Dopplr, and this time, it's Google's picture sharing site Picasa Web.

My starting point is the same: "Everyone else" among colleagues and friends was there long before me, and I feel like a latecomer. I want to go in, do what seems to be the right thing, and share the observations I had. And everything within the time constraint of not being able to do a full evaluation, as I obviously have other things to do as well. 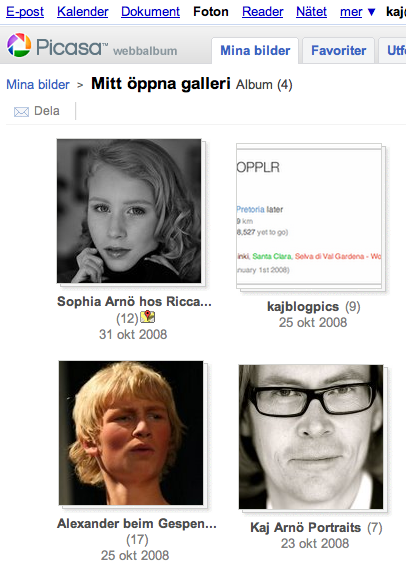 Unlike Dopplr, starting with Picasa Web never required invitations. My first exposure to Picasa was through MySQL colleague Zack Urlocker's biking trips. He shared albums of his trips, which I browsed through, and found "quite OK". Meaning: Easy to consume pics posted by others, but no trigger for me to start producing web albums myself. When running with Zack, the Picasa topic occasionally popped up, with me expressing skepticism towards the time expenditure for uploading a gallery, and Zack saying it wasn't that hard, as there is a good picture uploader. It turns out Zack was right, as I learned much later.

What triggered me to join Picasa Web was my blogging. A blog entry without a single picture isn't very appealing, and some blog entries require many pictures. I had for long used a complex setup, uploading my pictures using Unix utility scp from my Mac to my account on @arno.fi. The domain arno.fi was a parallel domain to a now-extinct server grankulla.mysql.com, which I had to stop using after the Sun acquisition, as the use was bordering on the private. So I started to host arno.fi privately (a different story entirely) and became worried about bandwidth cost for the pics referred to from blogs.mysql.com/kaj. So the MySQL Web Team enabled uploading of pictures as part of the MySQL Wordpress blog site itself. This worked fine, but by this time I had already thought a bit about hosting the pics on Picasa or Flickr. So when I saw Picasa pictures automatically connected to Google profiles and Google maps, I decided to try out Picasa. 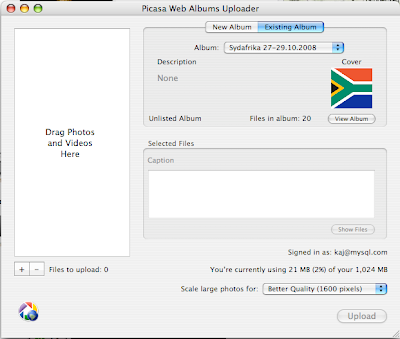 Like for all social networking sites, I obviously had to register. This wasn't hard, and it was part of my general Google profile (Google Reader, Google Mail etc.). The real obstacle which had kept me from doing it earlier was installing the picture uploader, called "Picasa Web Albums Uploader". I'm not a person who likes to tweak with the technical setup of my computers, hence the reluctance. But it was OK. I didn't have to know anything in advance; the Picasa web site gave the relevant pointers and I wasn't lead astray during the installation.

Next came the learning part, which in fact turned out to be fun. Uploading the pictures was trivial. I am a character based ("command line") type of guy, hence the perceived ease-of-use of the scp utility. But merely dragging the pictures from the Mac Finder to the Picasa Uploader was easier still. And uploading pics with the Picasa Uploader came with two real benefits:

The next step is completely optional, but very "cool" and inspiring: I can tag the pictures, and I can place them on Google Maps.

Tagging is merely about finding out multiple, good descriptions for pictures, for later searches. So that doesn't take long. 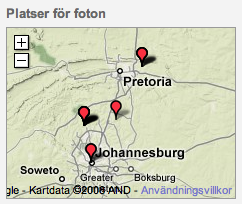 Placing the picture on the map can be everything from dead easy to very frustrating. For my pictures from Munich, I very simply typed in the address: just "Balanstr. 22" for the pictures of my son trying to be an actor, and "Kleinfeldstr. 28b, Germering" for the pictures of my daughter by Riccardo Desiderio. For South Africa, it was much harder. It didn't know Kievits Kroon, Reier road, or even Kameeldrift. I just had to point manually to somewhere north-east of Pretoria, where I assumed the pics were taken. That was a time drain.

Still, as a result, I got a nice map of where I took the pics of the trip, and if I'd like more detail, I'll even see the individual pictures placed on a map. 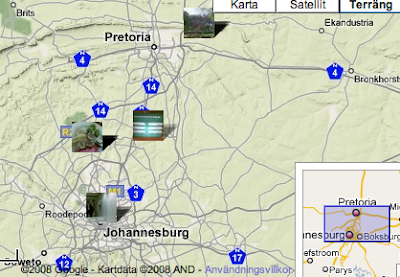 The last step is about using the Picasa pictures in the blog itself. And this is also a bit simplified from my character-based scp blogging, where I had to semi-manually concatenate the first part of the picture urls ("http://kaj.arno.fi/") with the name of the picture ("IMG_1234_Blabla.JPG"). In Picasa, I do the opposite, i.e. I cut-and-paste the huge text provided by Picasa, e.g.

and clean it up from surplus stuff to get only what I want, i.e.

which I then paste into my Wordpress blog entry, perhaps adding an align="right" or align="left" in the process. And I take care to select the desired resolution: 144px, 288px, 400px or 800px; more than once, I've been happy with reducing the picture size further than what I would have done during my Imagemagick resize days.

In all of this, I see little if any problem, except the huge size of the licensing agreement I clicked through. That's another barrier of entry. I don't know what I really agreed to. Who knows, perhaps I even violated the agreement by taking screen shots of what Picasa looks like, for this blog entry?

Which brings me to my summary:

Starting to use Picasa Web Albums has so far been a very positive experience, and I do expect to manage all my online pictures in it, and get lots of good vibes from it going forward.