MySQL 5.1 Use Case Competition -- until end of September!

To recap, here's the original posting (with an updated deadline):

With 5.1 having officially been in Release Candidate status since September 2007 and soon approaching GA status, the MySQL Community Team launches a competition for the users of new features of MySQL 5.1: 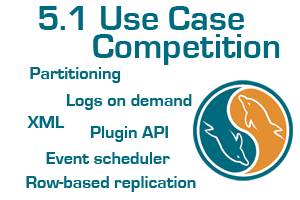 Submit your MySQL 5.1 Use Case Report to community(at)mysql.com by 30 September 2008 and have a chance of winning one of our prizes:

You may phrase your MySQL 5.1 Use Case Report freely, but the more colour you give it, the better your chances of winning.

By submitting the report, you also volunteer for appearing in our upcoming Use Case articles. We will consider any data you submit in your Use Case Report as public and quotable in our reports. However, you may ask us to anonymise certain aspects of your use case, should you otherwise not be able to participate in our competition.

This is the desired format of your submissions:

From: <you>
To: Community(at)mysql.com
Cc: <any of your colleagues you wish to inform>
Subject: MySQL 5.1 Use Case Report: <Feature> / <App Name>

Purpose of our appication:

Relevant metrics on size/type of application:

Our greetings to the MySQL Engineering Team:

Name and email of submitter / developer:

[1] If you've found bugs, then please follow our bug reporting instructions and share bug numbers from bugs.mysql.com in your use case report.

We're looking for Use Cases on all new MySQL 5.1 features, but especially on

On Saturday, I spent a couple of hours running with Alexander Stubb. No, Alex is not our newest recruit to the MySQL Support Team, he's the Foreign Minister of Finland (the guy in the yellow T-shirt below).

But let me rewind to the beginning. I have been increasing my running to over 1200 km a year, and when I heard that the MÃƒÂ¼nchner Stadtlauf half-marathon doesn't crash with Finnish midsummer (something never to be missed), I registered for it and finished it in 1:45:58. And I calculated I would have a chance at going below four hours at a full marathon, so I registered for the Helsinki City Marathon, which took place last Saturday on 16.8.2008 in my native Finland.

At a restaurant close to the Olympic Stadium just before start, I met with my long-time MySQL colleagues Patrik Backman and Giuseppe Maxia, as well as our fresh Sun colleague Peter Eisentraut, of PostgreSQL fame. When the time for the start (fairly late, three o'clock in the afternoon) approached, I went for the start area, and was pleasantly surprised to hear the race moderator interview our Foreign Minister.

To continue my pleasant surprise, Alex said he was not only going to be the starter of the marathon, but he was going to run himself. The interview was started in Finnish, and then went on to Swedish. "What's your target time?" the interviewer asked. "Oh, I have one, but I haven't published it" -- he evidently had the same marathon goal communication policy as I. The interviewer swapped away from our two domestic languages to foreign ones, going over English and German to French. And Alex continued smoothly and fluently in his colloquial, youthful jargon in all of the five languages. He had a targeted and clearly unscripted message in all languages. In German, for instance, Alex shared how Frank-Walter Steinmeier (Germany's Foreign Minister) the day before had found him to be slighly mad for going for a marathon, right after a week full of intense Georgia related negotiations.

The interview formed a very good pep talk for us runners, and an opportunity for me to no longer have to be ashamed of the linguistic disabilities of our Foreign Minister (as used to be the case when I grew up, leading to a whole genre of jokes). I share Alex's view that one can show respect by speaking the language of the audience (and Helsinki City Marathon has a very international audience).

So off we went, and the start went well. The weather conditions were perfect: Drizzle. And 16-18 degrees. Not too cold, not too hot. A few km after the start, I saw Patrik, Giuseppe and Peter amongst the spectators, and they took some pictures of me. 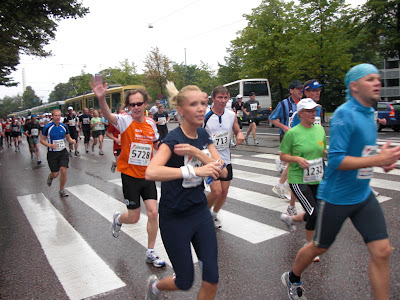 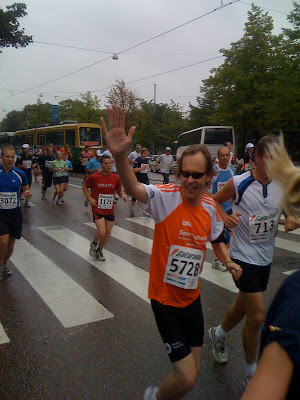 The race passed by the Parliament Building, went out through familiar parts of Helsinki (Mejlans, TÃƒÂ¶lÃƒÂ¶, MunksnÃƒÂ¤s) to Esbo close to where MySQL's first Finnish offices were, and continued via the Nokia House to the absolute centre of Helsinki. That was the most enjoyable part of the running experience. I kept to my pace, and I felt like being on a train. I just went with the flow and didn't feel any effort. But after a while, my left knee started to remind me of its existence. Past the 21,1 km half way mark, it evened out as my right knee also begged for some attention. But basically, everything went fine until a while beyond 30 km, when the energy reserves of my body were depleted.

"So why didn't I drink more of the Gatorade offered?", the running reader will ask. Well, I had prepared a perfect excuse for the scenario in which I would have to stop: When in India for the MySQL Camp in Bangalore, I had caught salmonellosis. Salmonella bacteria are not a nice companion if you run, but also not total inhibitors for running. That said, I chose not to upset my stomach any further by consuming potent, unfamiliar drinks. And the effect was that I dropped from 1606th position at 30 km to 1970th position in the goal (out of 5436 participants).

So this meant that the last few km weren't all that enjoyable. But I still didn't get cramps like the 55 year old male athlete who was screaming "aijaijai" less than a km from the goal, at as many decibels as his lung capacity allowed. Humbling. 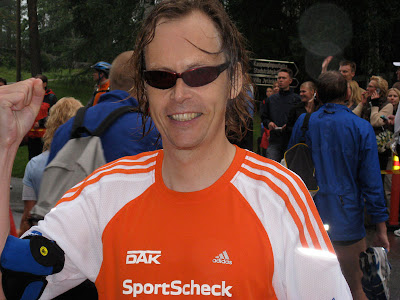 I finished at 3:55:22. That's my best marathon ever, about 45 min faster than my previous personal record. I didn't feel well in the goal, rolling back a few of my latest drinking transactions just after crossing the finish line (honest, it was just water).

After the run, I went for something very typically Finnish: A sauna. And there can hardly be a better timing for a nice, warm bath than right after getting into the goal of a cool (at least temperature-wise) marathon run. My body is often out of balance in many ways after a marathon, including but not limited to shivering out of cold. Ah, was it nice to relax and do some joint bragging together with fellow runners in the Olympic Swimming Stadium. And after the sauna, there were still plenty of runners coming to the goal area. I felt zero superiority over them, as I still vividly remember my own first marathon with a time of 5:41. A marathon for an amateur must strictly be about competing against yourself. And if you (like me) start lousy enough, you've got an easy target to beat.

And, what happened with Alex Stubb?

Well, he had shared with us that he had finished a previous Helsinki marathon in 3:59 and a Brussels marathon a bit below 3:40. I suspect he might have targeted 3:30, and like me, he lost positions towards the end of the race. At any rate, he finished 688th with a fabulous time of 3:31:25. Extremely impressive for anyone, especially for a Foreign Minister!

(Yes, Alex did wear something slightly more appropriate than a suit for the marathon).
Posted by Kaj Arnö at 21:22 8 comments: