I hadn't run a race since 2003, but I have improved upon my amount of running and thought it would be good to see whether it would show in my race time. It did! 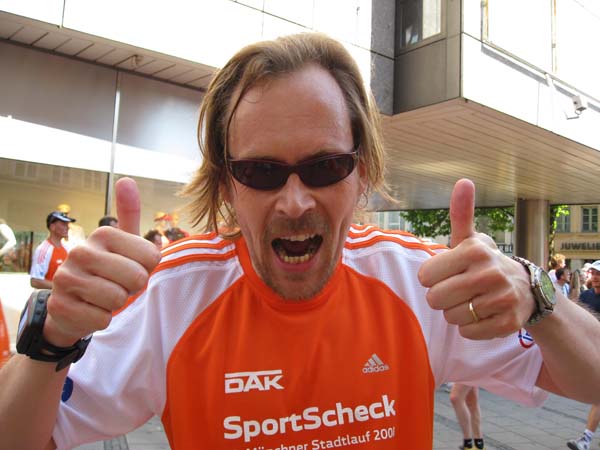 Thumbs up after a half marathon finished in record time

"From a fat bastard to a running dynamo" was what a fellow member of the MySQL Running Club SMSed me when I had proudly announced my personal record of 1:46:05 (as measured "on the safe side" by my own watch; the organisers timed me at 01:45:58) on the MÃƒÂ¼nchner Stadtlauf half marathon in Munich today. 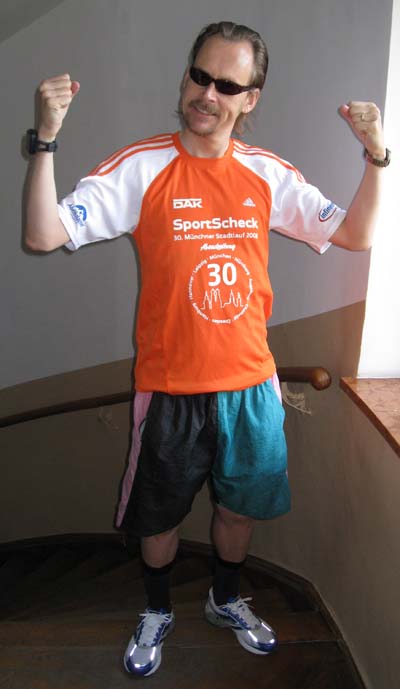 Full of energy before the race

While I may never have fully qualified for the attribute "fat", I certainly was very bad at sports at school. My average speed on 21 km today (11,9 km/h; 5:03 minutes/km) was the same as my average speed on 2400 m at school, which was the distance that I did at school at the Cooper test (where the point is to run as far as you can for 12 minutes). 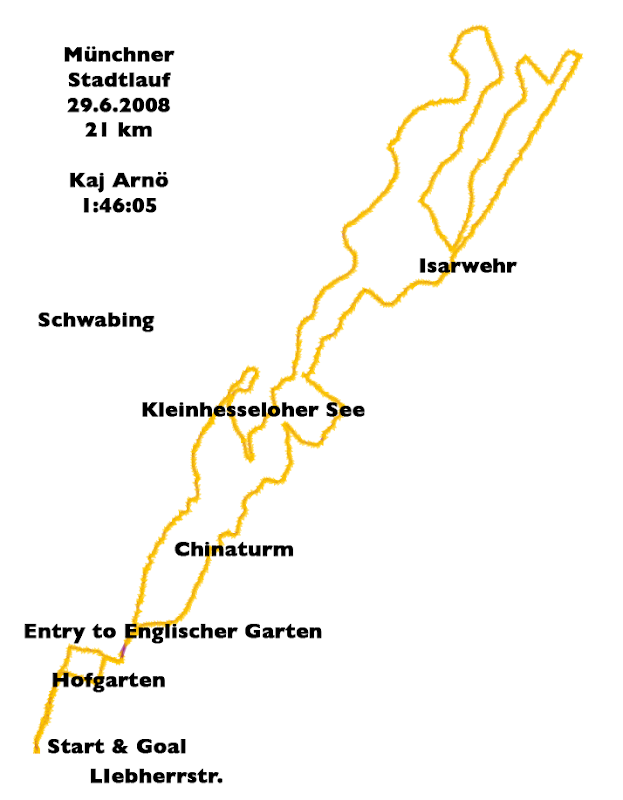 The route as plotted by my Garmin Forerunner 305

The MÃƒÂ¼nchner Stadtlauf half marathon has a very scenic route, starting at the central square Marienplatz and going past the Theatinerkirche by the Hofgarten into the Englischer Garten, where most of the run takes place. 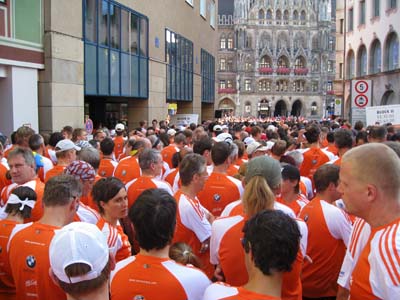 Waiting for the start at the Rathaus on the Marienplatz

On my right shoe, I had a one-time chip for measuring my time, which we got from Sport Scheck, the organising sports store, along with the orange T-shirts. Good thing Germany doesn't play Holland in the football finals today, as our attire would have been considered treason by most runners. 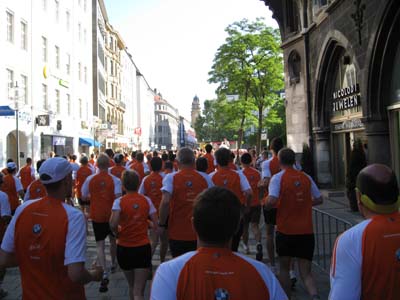 Despite standing at the right spot ("1:45-2:00"), I ended up passing lots and lots of slower racers during the first 20 km of the race. The paths for running are narrow, and doesn't really carry the capacity for this amount of runners. It's especially hard to run past groups of two or more runners next to each other. Oh well, running a race is meant to be fun, and it is fun, but still: Perhaps it would be a good idea to suggest some traffic rules like "slower runners to the right" and "no more than two fellow runners next to each other". 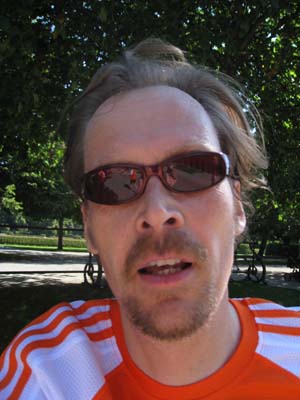 At km 20 in the Hofgarten

Given how this went, I'm likely to want to run another race. 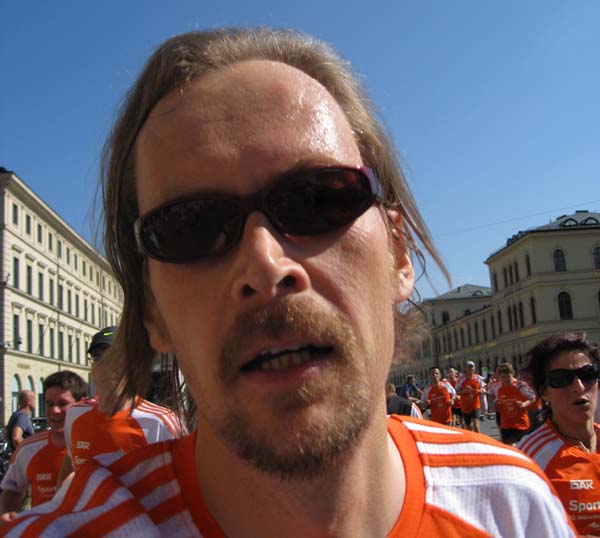 At the Theatinerkirche on the way back 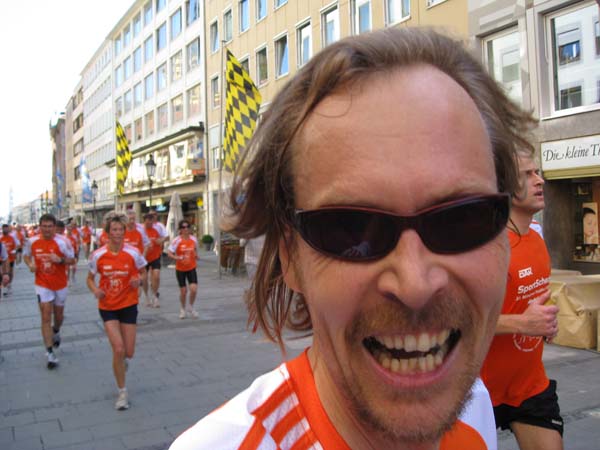 Feeling more confident to reach the goal, now in the WeinstraÃƒÅ¸e 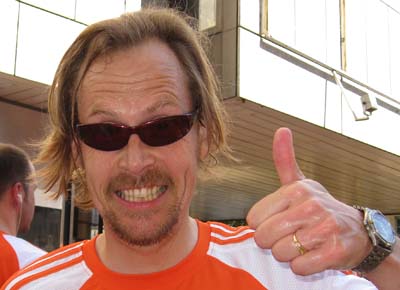 The next goal is the 35th MÃƒÂ¶viken runt in Nagu, Finland next Saturday 5.7.2008. Nagu IF started five years before the MÃƒÂ¼nchner Stadtlauf, which had their 30th event today. 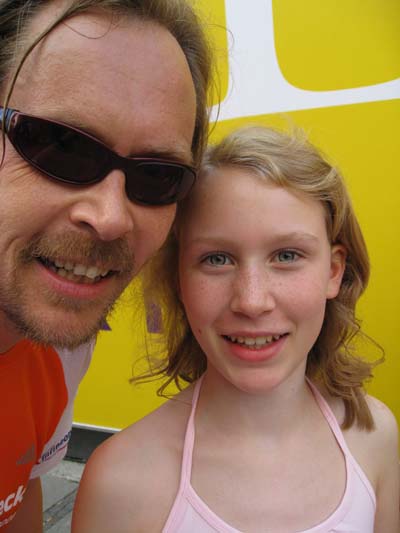 Sophia ArnÃƒÂ¶ proudly (I hope) took pictures of her father

My hand-made statistics for men: